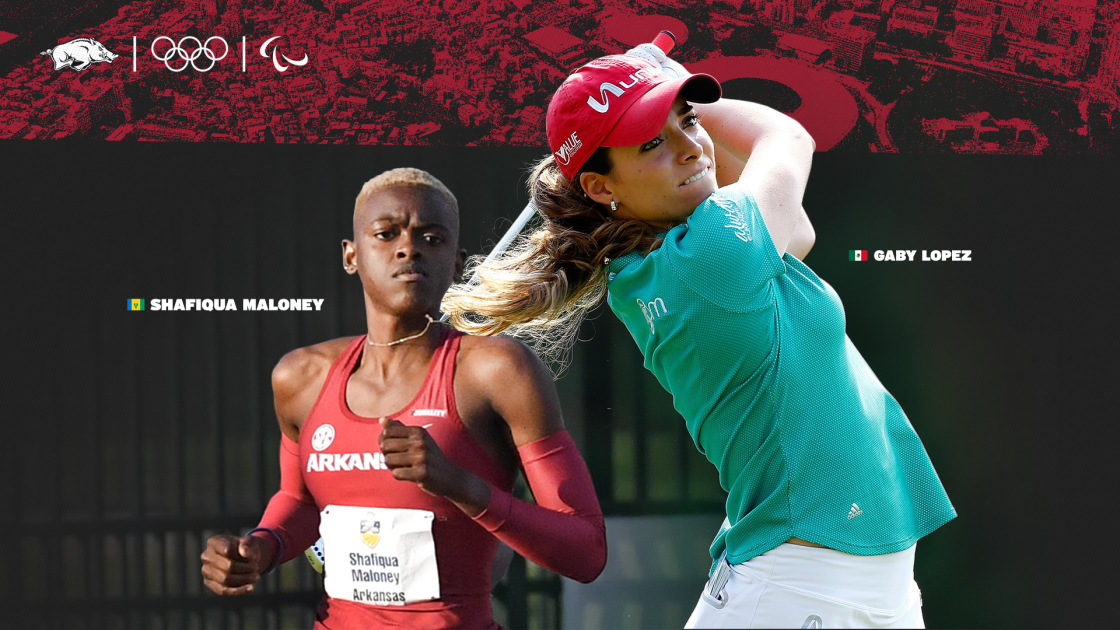 Tokyo, Japan – During the Parade of Nations portion of the opening ceremony for the Tokyo Olympics on Friday, two Arkansas alumni will have the distinct honor of being the flagship of their respective countries. Shafiqua Maloney will represent Saint Vincent and the Grenadines while Gaby Lopez will represent Mexico.

Held a year later than planned, the opening ceremony for the 2020 Summer Olympics will take place on Friday evening at 8 p.m. (JST) at Japan’s new national stadium. Typically watched by hundreds of millions of viewers worldwide, the Opening Ceremony will air from 5:55 a.m. to 10 a.m. (CT) Friday morning on NBC.

In the Parade of Nations, which includes 205 countries, Saint Vincent and the Grenadines will be # 97 in order while Mexico is # 181.

In the absence of authorized fans at the opening ceremony, a group of approximately 10,000 diplomats, foreign dignitaries, Olympic sponsors and members of the International Olympic Committee will be the only spectators present.

At her first Olympic Games, Maloney was one of only three athletes representing Saint-Vincent in Tokyo. She will compete in the 800m, the first round of which will take place on July 30, the first day of athletics at the Tokyo Olympics.

“The trip was not what I expected, but we made it to our destination anyway,” said Maloney. “So I’m very grateful for the opportunity to go and represent myself, my country and most importantly the University of Arkansas with the resources they have provided me here.

“I have never flown a flag anywhere before, so to do that I am looking forward to the experience. It will be an unforgettable experience. “

Lopez will be one of two flag bearers for Mexico, as countries had the option of selecting two people, a woman and a man, to promote gender equality. In the Olympic golf competition, which begins August 4 in the women’s competition, Lopez teams up with fellow Razorback, Maria Fassi, to represent Mexico.

“To be the flag bearer is such a dream come true,” said Lopez. “I mean, you can tell how much I love my country. Every Sunday I wear the colors of the Mexican flag on my outfit, and being able to physically wear that flag, it just gives me chills.

“That’s exactly what I play for. I play for my country, for my people, I play for the new generations to be able to inspire them and bring them to golf.

Maloney and Lopez are two of 14 Arkansas-linked athletes who will compete in the Tokyo Olympics and Paralympics while representing nine different countries.

Of this group, there are 10 athletes competing in track and field. In addition to Maloney, the female crew includes Sandi Morris (USA), silver medalist in pole vault at the Rio 2016 Olympic Games, the 400m hurdles Sparkle McKnight (Trinidad and Tobago), Dominique Scott (Africa). South), who will compete in the 5,000m and 10,000m, and pole vaulter Tina Sutej (Slovenia).

Representing the Razorback men are Kris Hari (Denmark) in the 4 × 100 relay, Kemar Mowatt (Jamaica) in the 400m hurdles, Phillip Lemonious (Jamaica), a reserve in the 110m hurdles, and the world record holder in the shot put Ryan Crouser (USA), a volunteer assistant coach with the Razorbacks, who is the reigning Olympic shot put champion. Hunter Woodhall (USA) qualified for the Paralympic Games in the 100m and 400m.

Swimmer Anna Hopkin (Great Britain) competes in the 50m and 100m freestyle while also being in the relay group. The preliminaries for the 4 × 100 freestyle relay take place on Saturday, July 24, the day after the opening ceremony.

Lopez and Fassi face off in golf where four rounds of competition will take place at the Kasumigaseki Country Club. Kelsey Plum, Razorback Women’s Graduate Basketball Assistant, is on the United States Women’s 3 × 3 team. The first pair of matches will be played on Saturday July 24 against France and Mongolia.

Parade of Nations | Order of countries represented by the Razorbacks